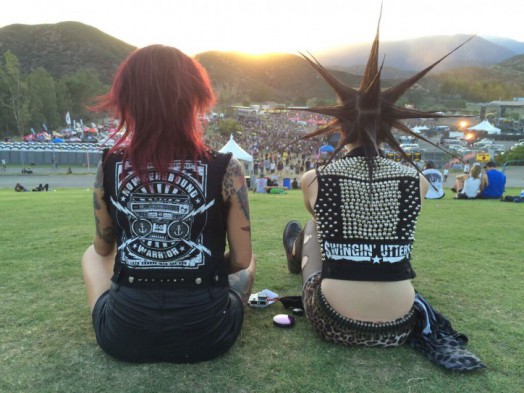 Some people have all the fun!  Here is the latest music blog from our West Coast pal & AYP contributor Erin Micklow.
It’s Not Dead Fest 2015
A few weeks ago I attended the It’s Not Dead Fest out in San Bernardino, CA. With the
advertised line up I was so excited about this festival until I realized it was a Kevin Lyman
(Warped Tour founder/creator) production, which then turned my excitement into skepticism.
The festival was pretty much exactly like the Warped Tour but 1990s/early 2000s Warped Tour
(the ones I was too young to attend). It was really cool to feel like I was experiencing something
I always felt I missed out on by being a decade too young.
On the 15 min walk from the car to the entrance, I ran into a couple punx that told me
security was not letting in bullet belts or studded jackets (both of which I was wearing)! Being
prepared to possibly have my bullet belt vetoed by security, I had a spare studded belt in our
car, BUT I was wearing my vest as a shirt & did not bring any backup shirt! Hell no was I about
to being running around the fest in my bra & mini skirt haha! When we entered, my girlfriend had
been put on the list by one of the bands playing, so to avoid the 45 min security line we walked
in with her in the VIP entrance and thankfully were not stopped & checked by security! There were a lot more people there than I thought there’d be for a festival in it’s first year
with somewhere between 5,000-10,000 attendees. It was a little overwhelming at points! With 3
stages, a skate ramp, vendors and a circus tent full of artists, we saw a lot. But there was also a
lot we missed out on because it was just too much to do in one day! On top of it all, it was about
100 degrees (literally) until the time when the sun started to set. Being fair skinned, I can’t
handle heat like that so the only thing I could do to cope was purchase a giant cocktail. $14 for a
regular & $17 for a double!!!! Holy hell it was expensive (Warped Tour prices), so being as thrifty
as one can be in that situation, I ordered a double vodka on the rocks with a ton of ice (the $5
water bottle my girlfriend purchased to cool down was hot in about 10 minutes) and booked it
over to the Rockstar tent to grab a free mixer. 😀

Overall, it was a really fun festival & I’d definitely attend again next year despite the
things I didn’t like about it (the strict security & high drink prices). Lots of friends, good hangs, &
great bands left me feeling exhilarated and happy afterwards. I’d put this fest in line after Punk
Rock Bowling & Riot Fest Chicago for best American punk festivals!
If you weren’t able to attend, cruise over to my Youtube channel & watch some of the bands that
played It’s Not Dead Fest!
www.Youtube.com/c/ErinMicklow
or search “Erin Micklow”
Until next time…
Xo,
Erin Micklow
IG/Twitter: @erin_micklow
www.facebook.com/ErinMicklowOfficial